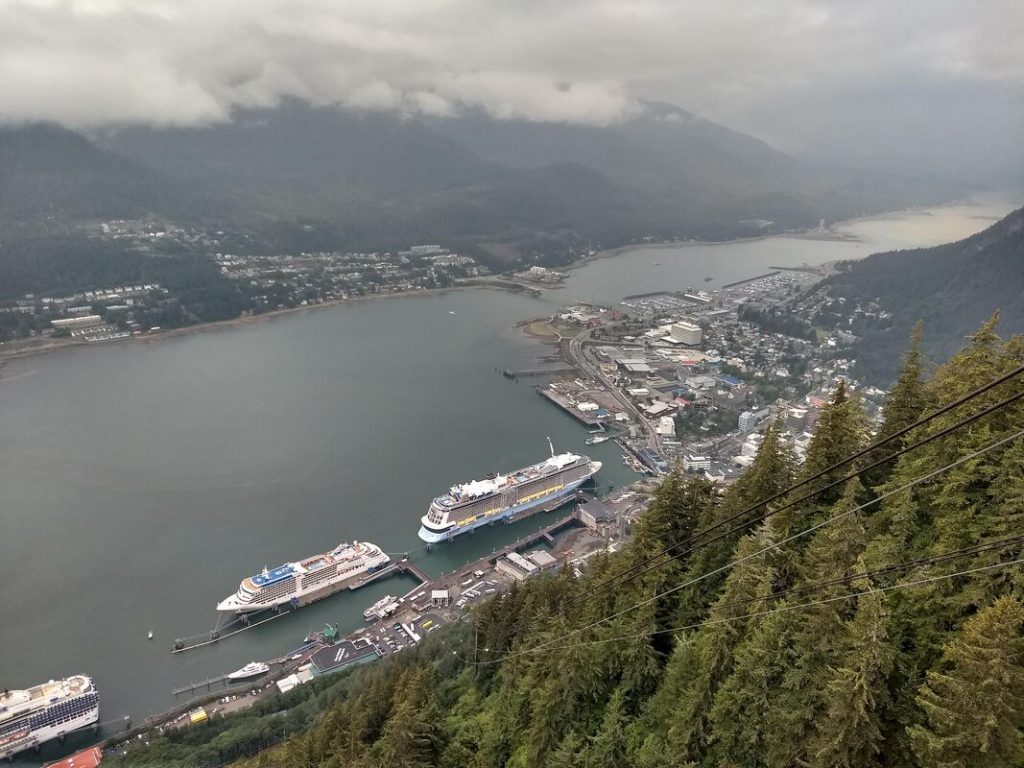 Ok so I admit when our ship is about to leave port I would head up to the upper deck and see if I can catch any last minute runners that are close to missing the boat.   I would also laugh when I hear the announcement over the speaker looking for certain guests that are not showing as back onboard as the time to depart approaches.  However I don’t think I will do that anymore since I was almost one of those people.

It was on our Alaska cruise in the Juneau.  If you have been there before you have probably ridden or at least seen the Mt Roberts tram to the top of the mountain.   Depending on where your ship docked you could have been almost parked right in front of it.  On this visit our ship was right there so we thought why not take a ride since we hadn’t done it on our previous Alaska cruise.   We rode to the top and got out to walk around a little and then it started raining, which wasn’t a big surprise since it is part of a rainforest, but then we heard thunder and saw some lightning which seemed very odd.   We headed back inside to catch a ride back down only to find that the tram wasn’t running due to the storm.   At that point the line was already pretty long and no idea when it would start running again.   We asked about walking down and were told it was about 2 and half miles so we thought that isn’t too bad and might be faster than waiting.   We stated walking and were enjoying the trek despite a little rain but then it just seemed like we were walking forever and never getting any closer to the end.  We passed a few people walking up and ask how much further and each time they said about a mile even though we passed them about 15 minutes apart.  It is pretty wooded so you couldn’t get an idea of where you were until we finally got to a spot where we could see out to the water and realized we were still very high up and only had about an hour to make it back to the boat.   We picked up the pace and finally came out of the trail but realized that it came out a bit out of town and no where near the ships.  Panic started to set in as we realized we had about 30 minutes to get back to the boat.  Luckily a car was driving by and we flagged them down and they thankfully didn’t mind giving us a lift back to the ship.   Even with the ride we still were cutting it close.  We were so grateful to have made it back on the ship that we didn’t even realize that things were a little off and then we heard the announcement that the power was out.   We found out that the same lightning strike that stopped the tram also knocked out port to the port.  That caused the ship to leave port a bit later so we might have made it if we hadn’t found a ride back to the boat but I won’t take that chance again.

There were a few things running through my head as I thought we might miss the boat and I realized I really was not prepared.   Since that was a close call I was sure to look up what what happens if you miss the boat. I learned that the ship will make a couple attempts to be sure you are not already onboard including check in your room.  If  you are not onboard they will try to collect a few of your things to leave with the port agent for you.  It is then up to you to either get to the next port or home.

Here are my tips for being prepared when you get off the ship:

#1 – Be sure to take a copy of your passport with you when you get off the ship.  You don’t want to take your actual passports as you really do not want to lose those.

#2 – Know where your passports are in the room   If you are pretty sure you are going to miss the boat you can call the ship and have guest services go into your room and get your passport to leave with the port agent.  They can also grab other important things like medication.  If you are not able to call the ship to let them know you are not going to make it someone from guests services will go to your room and attempt to find your passports anyway.  If they can easily find them they will get them to the port agent.

#3 – Book with a travel agent (yes I know it sounds like a shameless plug but your agent really is your best advocate).   You might not have the ship phone number handy on your excursion but my guess is your travel agent phone number should be in your phone somewhere so call and then your agent can take care of helping you make your plan for what comes next.

#1 – Book a shore excursion through the cruise line or a 3rd party that offers a back to ship guarantee as that is your best protection since it is more likely the ship will wait for a ship sponsored  excursion.  If for some reason the ship leaves without you the cruise line or tour provider will take care of the arrangements to get you to the next port.  If you do choose a 3rd party be sure you research and know what their policy is for a late return to port.

#2 – If you do go off on your own in port be very mindful of the time you need to be back on the ship and account for the time needed to get back to the port and go through any possible security. Some of the bigger busier ports could have multiple ships in at the same time and they might leave around the same time so there could be lines.   Also remember that the time ships leaves and all aboard is not the same thing.   The all aboard time is earlier than the actual depart time.  Another thing to be sure of is that your watch is set to the correct time since sometimes on your cruise you might cross time zones.

#3 – Make sure you really know where your ship is docked.  If there are multiple ships in port with you there could be multiple docks being used so just saying to your taxi take me back to the port might not work out as easy as it sounds.

My biggest tip is for those of you that choose to cruise without a passport – WHATEVER YOU DO YOU CANNOT MISS THE BOAT!   Without a passport you really could be in trouble if you miss the boat.